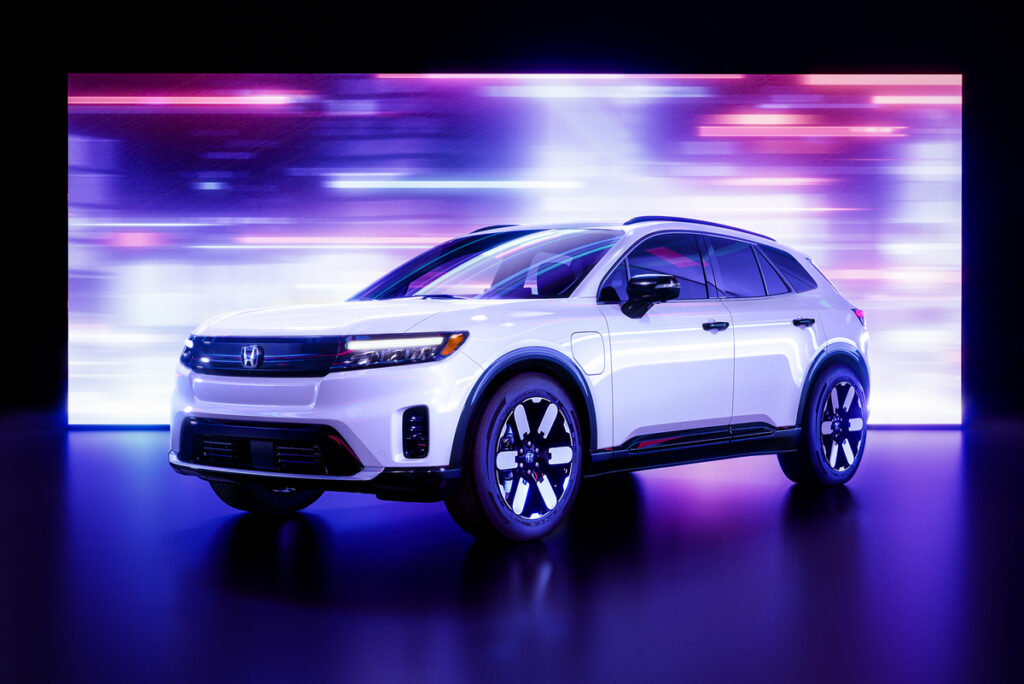 The 2024 Honda Prologue is a sign of things to come for the automaker. As these kinds of vehicle unveilings often go, the Prologue carries a more futuristic exterior design, a tech-packed and connected cabin, and an electrified powertrain, all targeted toward a younger demographic. However, with the 2024 Honda Prologue, a little more is happening under the surface.

The most interesting news is how Honda will offer shorter-term lease plans in zero-emissions vehicle (ZEV) states to transition hybrid customers to electrified vehicles and increase the likelihood of more widespread EV adoption. That and how the 2024 Honda Prologue was developed in concert with General Motors.

Honda dubs the overall design of the Prologue as “Neo Rugged,” a look and feel devised by the automaker’s design team in Los Angeles (the Honda Design Studio is in LA). The idea is to present multiple elements simultaneously through the design, be it clean and simplistic or stylish and calm. Like other vehicles before it, the 2024 Honda Prologue finds part of its identity in nature. For example, the North Shore Pearl exterior paint was inspired by the colors near Lake Tahoe, while the charcoal and light gray interior is meant to resemble snow on the mountains.

“Our goal was to create a clean harmony based on a rugged SUV image by coordinating the colors and materials to express neo-rugged design styling that’s familiar to our customers and uniquely Honda,” said Masaki Sumimoto, design lead for the Color, Materials, and Finish.

As the first fully electrified SUV from Honda, the Prologue is classified as a light truck in the automaker’s portfolio. It will be in good company, alongside the already popular CR-V and more rugged Passport. The 2024 Honda Prologue will have a wheelbase of 121.8-inches, about eight inches longer and five inches wider than the 2023 CR-V. According to Honda, the Prologue will be available with all-wheel drive.

Honda wants to achieve carbon neutrality by 2050, aiming to introduce 30 new EVs globally by 2030 and achieve a global sales volume of two million units. In North America specifically, Honda is following an ambitious timeline of EV debuts in three initial phases leading to 2030 (and ultimately to 100 percent zero-emission automobile sales by 2040). The phases are as follows:

The Honda and GM collaboration has been brewing for a while. In September 2020, the automakers announced a non-binding memorandum of understanding after preliminary discussions about a North American automotive alliance. The scope of the proposed alliance included a range of vehicles to be sold under each company’s distinct brands. Both automakers would cooperate in the areas of purchasing, research and development, and connected services.

In April 2022, Honda announced a $40 billion investment to accelerate the development of electrified vehicle technology. The 2024 Prologue and an unnamed Acura SUV were mentioned in that announcement as some of the first vehicles that would debut with GM’s Ultium powertrain. Meanwhile, Honda plans to build a dedicated EV production facility in North America, similar to how GM has done with its Detroit Factory Zero.

The Honda and GM collaboration should have a number of “behind the scenes” benefits for the companies. Ideally, the partnership will help manufacturers reduce costs and maximize engineering and product development efficiencies. In theory, that should help reduce the barrier of entry for consumers, whether their reservations stem from range anxiety or the higher MSRP typically seen with EVs.

To help facilitate the larger movement toward electrification, Honda is examining its research that shows how hybrid-electric customers are among the first to move into full-electric products. Based on that data, Honda will increase the “model mix” of the 2023 CR-V to 50 percent hybrid, offering potential CR-V hybrid buyers a shorter-term, two-year lease in ZEV states. According to Honda, this enables customers in targeted markets to easily transition into a Prologue when it arrives on the market.

“We are not going to wait until 2024 to attract EV buyers because we see a natural progression for a CR-V customer to Prologue with its slightly larger size, larger interior, and capable handling,” said Gary Robinson, Vice President, automobile planning and strategy at American Honda. “We will support that transition now by putting smart strategies in place with the CR-V hybrid that will enable our customers to transition to an EV.”

The new CR-V is set for a fall 2022 launch, while the Prologue will arrive in North America in 2024.

*This article originally appeared on Automoblog and has been republished on AutoVision News with permission.

Carl Anthony is Co-Founder & Managing Editor of AutoVision News and a member of the Midwest Automotive Media Association and the Society of Automotive Historians. He serves on the board of directors for the Ally Jolie Baldwin Foundation, is a past president of Detroit Working Writers, and a loyal Detroit Lions fan.
PrevPreviousGM & OneD Collaborate on Joint R&D of Silicon Anode Technology for More Efficient EV Batteries
NextToyota Extends Safety & Service Connect Trial Periods for Select VehiclesNext