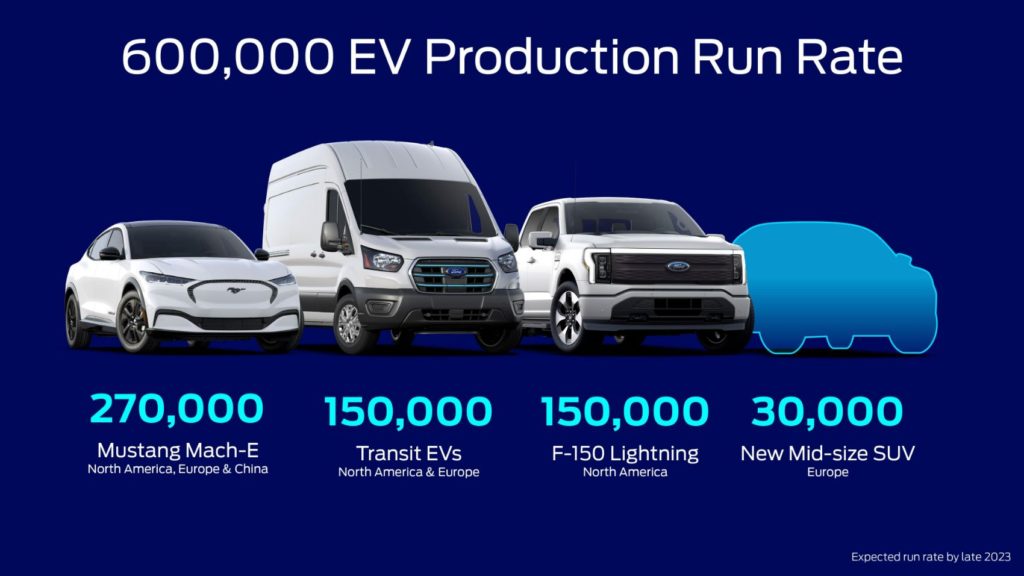 Legacy automaker Ford estimates the annual growth rate for EVs to exceed 90 percent by 2026. The figure is more than double the initial forecasted global industry growth for new electric vehicles. Ford will invest over $50 billion in new EVs through 2026, and the automaker plans to churn out 600,000 EVs annually by late 2023. Helping achieve those ambitious targets are new initiatives to secure battery raw materials and create updated EV battery chemistries, weaning off the industry’s reliance on critical materials like nickel and zinc.

“Ford’s new electric vehicle lineup has generated huge enthusiasm and demand, and now we are putting the industrial system in place to scale quickly,” said Jim Farley, President and CEO of Ford and President of Ford Model e. “Our Model e team has moved with speed, focus, and creativity to secure the battery capacity and raw materials we need to deliver breakthrough EVs for millions of customers.”

Ford has also enjoyed bullish demand for its new EVs like the Mustang Mach-E and F-150 Lightning. The American automaker increased its manufacturing target of the F-150 Lightning from 40,000 to 150,000 units annually when production officially started in April 2022.

The numbers are part of Ford’s plans to produce 600,000 new EVs by 2023, a marginally bold agenda that includes 270,000 Mustang Mach-Es (North America, Europe, and China), 150,000 Transit EVs (North America and Europe), and 30,000 units of an all-new SUV for European clients. Ford also announced that it secured 100 percent of the annual battery capacity required to support its plan of producing 600,000 new EVs by the end of next year.

“Our team has been actively engaged with partners in the United States and around the world,” said Lisa Drake, Ford Model e Vice President, EV Industrialization. “We will move fast in the key markets and regions where critical supplies are available, meeting with government officials, mining companies and processors and signing MOUs and agreements that reflect Ford’s ESG expectations and underpin Ford’s plan to bring EVs to millions.”

With its newest partnerships, Ford has announced that it secured 70 percent of the battery capacity to produce more than two million new EVs by 2026. Ford plans half of its global production to be EVs by 2030 and wants to achieve international carbon neutrality no later than 2050.

Ford is also working with Eco Pro BM, SK On, Ioneer, Compass Minerals, and Syrah Resources to localize the production of EV battery raw materials in the USA. “These collaborators see value in the strong demand we have created with exceptional products like Mustang Mach-E and F-150 Lightning and the stability we can bring to these relationships,” Drake added. “It’s a very competitive landscape.”

Alvin Reyes is a feature writer and contributing editor for Automoblog, the sister publication of AutoVision News. He studied civil aviation, aeronautics, and accountancy in his younger years and is still very much smitten to his former Mitsubishi Lancer GSR and Galant SS.
PrevPreviousNew Research Report: What Will Urban Mobility Look Like by 2042?
NextCARIAD Selects Innoviz as Direct LiDAR Supplier for Automated Vehicles Within Volkswagen GroupNext