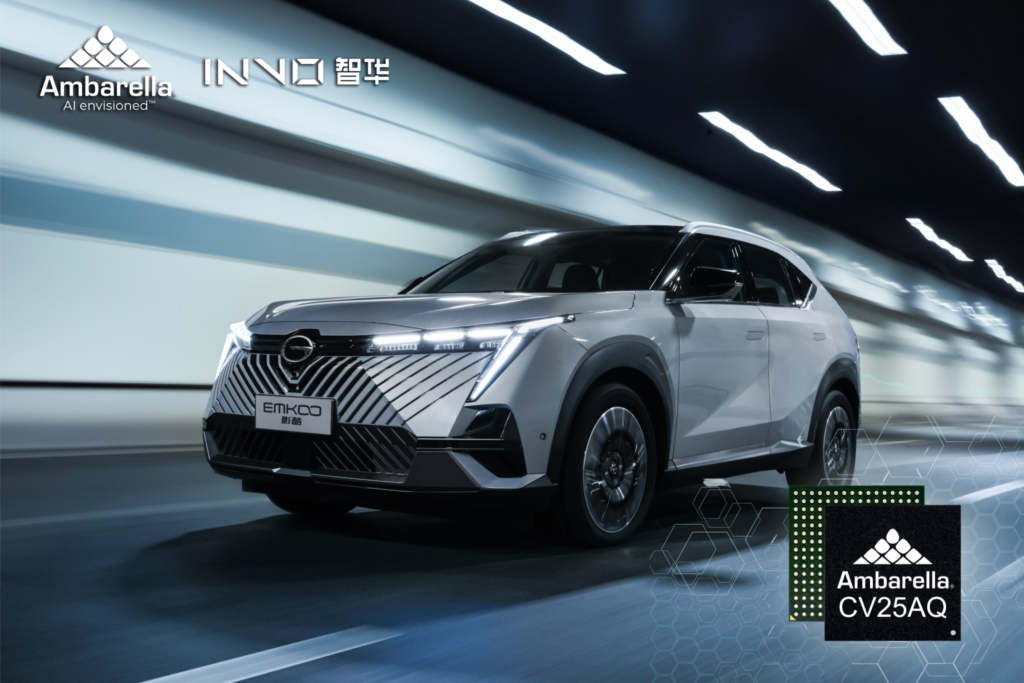 Ambarella, Inc. and Suzhou INVO Automotive Electronics Co., Ltd. (INVO Tech) have announced that INVO Tech’s Cockpit Super Sensory Interactive System, based on the Ambarella CV25AQ AI perception system-on-chip (SoC), has been implemented on the Emkoo SUV from GAC Motor. In a press release, Ambarella and INVO Tech described the news as something that can make driving safer by bringing multi-sensor perception technology into the vehicle interior.

The DMS camera uses OMNIVISION’s IR sensor to monitor the driver’s behavior and status in all directions and scenarios. Meanwhile, the OMS camera uses OMNIVISION’s RGB-IR sensors, which are deployed in the ceiling lights and left and right B-pillars to reduce blind spots in the cabin. The combined DMS and OMS cameras provide fatigue and inattention alerts for the driver while monitoring rear passengers, including children.

“It’s important to place a driver camera in the vehicle, but it’s about being able to look at more inside the cabin than just the driver,” said Andy Hanvey, OMNIVISION’s Director of Automotive Marketing, during the 2022 AutoSens and InCabin events in Brussels, Belgium. “The trends we are seeing in the industry are moving toward occupant monitoring.”

As further described in the press release, INVO Tech, in conjunction with upstream and downstream ecosystem partners, has developed a Face ID function to recognize gender, age, moods, and different gestures. Examples of the latter include reducing multimedia volume during phone calls, automatically rolling down the windows when smoking, and initiating auto-generated mood-based music playlists. The press release also credits the advanced algorithms powered by Ambarella’s CVflow AI engine inside its CV25AQ SoC.

The GAC Emkoo is the automaker’s first hybrid SUV, with a max range of 1,711 kilometers (1,063 miles) by way of its drivetrain, the GAC Mega Wave Power Hybrid GMC 2.0. The Emkoo is based on GAC’s Global Platform Modular Architecture (GPMA) which accommodates a number of vehicles, including sedans, SUVs, hybrids, and MPVs. Emkoo’s design, trim levels, and available features target younger Gen Z buyers.

Carl Anthony is Co-Founder & Managing Editor of AutoVision News and a member of the Midwest Automotive Media Association and the Society of Automotive Historians. He serves on the board of directors for the Ally Jolie Baldwin Foundation, is a past president of Detroit Working Writers, and a loyal Detroit Lions fan.
PrevPreviousBreaking Barriers Issue #2: Boots on the Ground With Staci Kono
NextStellantis & Future Energy Forge Partnership to Prepare Dealerships for ElectrificationNext